What traffic can the climate withstand?

How can the traffic meet our climate goals? We certainly need all modes of transportation, but the balance between them is absolutely crucial. Nature has a non-negotiable life cycle perspective. Our society must have that too. So provide us with the necessary knowledge!

In short
A gasoline fuel car with two people impacts the climate around 25 times as much as a bicycle per personkm. If you drive alone, it will be about 50 times. There is a grotesque difference between taking the car or the bike! All motorized trips also invite to longer distances. Then a vehicle’s already high climate impact can be multiplied several times.

With electricity, things will be different. Swedish electricity is very clean. But the manufacturing of both vehicles and batteries causes a big environmental impact even when it is distributed over the entire life of the vehicle. An electric car with two people can cause around 8 times the impact of a bicycle on the same distance. About half of this impact comes from manufacturing the battery and its materials. And how sustainable are actually the different types of public transport if you include everything they depend on?

The more people who travel by bike, the more forgiveness is created in society for those who are really forced to travel far and less climate-smart. Urban planning must make it possible for many to have cycling distances between everyday destination points. And not only make it possible, but also attractive!

The municipality must keep a close eye on the typical climate impact of all modes of transportation in order to be able to steer urban planning and infrastructure development towards its own adopted climate goals. The same, of course, applies to regions and the whole country’s government! Politicians need to have this knowledge at their fingertips to avoid making harmful decisions in good faith that we may later regret. And voters also need to understand this so that politicians are not ”forced” to decide against better knowledge. Decision-makers must ensure that good life-cycle-based data is available as a basis for our pursuit of real sustainability.

The climate impact of different vehicle types
You can’t demand from a private person like me to present a complete, reliable and completely up-to-date set of data. But I have anyway found a compilation of life cycle analyzes for several types of vehicles. Based on these data and information from IVL Swedish Environmental Research Institute and from Chalmers University of Technology, I have constructed data also for the electric car and marked the approximate impact of the electric bus. These data may have their shortcomings, but they are good enough to show that the balance between modes of transportations plays such a large role that decision-makers should not allow themselves to navigate blindly. All my sources are described in the section ”Background and references”.

The diagram shows the climate impact if a person travels the same distance with different means of transportation. Consideration is also given to the manufacture of vehicles and fuel. The bars for cars assume that you ride two in the same car. If you travel alone, the bar would be almost twice as high! 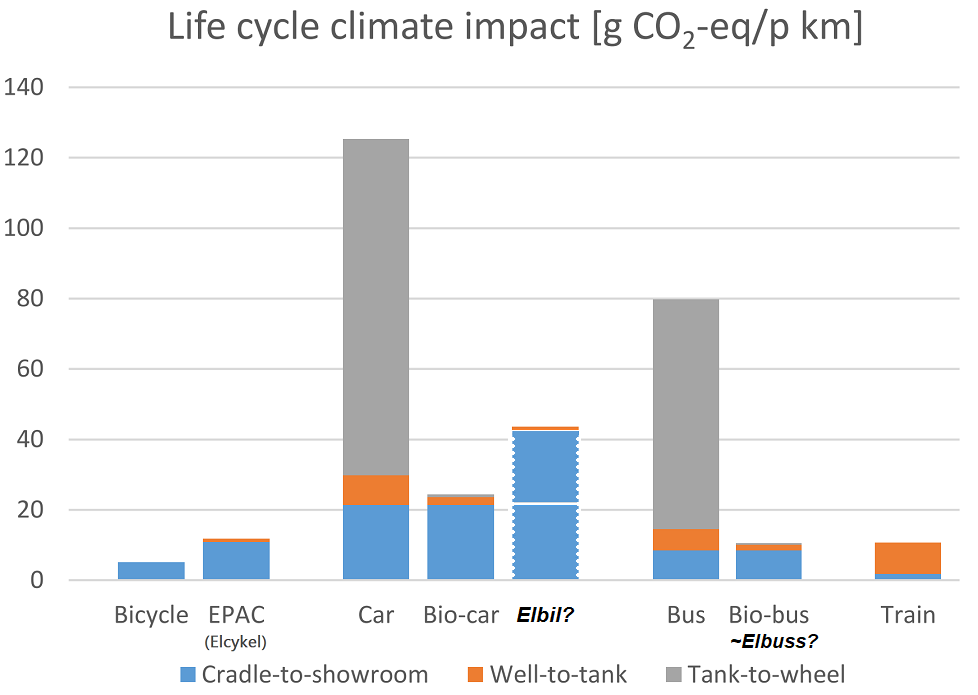 An LCA compilation from LTH 2014. The cars are powered by petrol, ethanol and Swedish electricity respectively, buses by diesel and ethanol, and trains run on Nordic electricity mix. The values for car, bus and train apply at 40 % occupancy. Electric cars were not included in LTH’s work, but my “Elbil?” is an estimation using info from IVL 2018. And ”~Elbuss?” indicates that the Volvo electric bus “ElectriCity” has an impact comparable to the diagram’s bio-bus according to a Chalmers report.

The differences from cycling are drastic – from just over double to 25-double or in the worst case 50-double impact for the same distance traveled! In addition, motorized travel causes many to choose longer everyday distances, which increases the impact of travel even more.

One problem with the diagram is that the climate impact from constructing and maintaining the infrastructure is not included. Roads, railways, tunnels, bridges, parking garages, terminals and everything that belongs to them are easy to forget in the calculation. Somehow it also needs to be taken into account. I guess the bike will come out even more advantageous in that case.

IVL (Swedish Environmental Research Institute) wrote the following as early as 2010 in the preface to its LCA report on the Bothnia railway line:

Today, it is difficult to find comparable and up-to-date life cycle data for the climate impact of all different types of vehicles. The lack of knowledge can cause many important decisions to be based on other wishes and that you only take chances in the climate area. It could be as simplified as ”Electricity sounds good – if we just use electric power, we can stop thinking”.

Changing societies and infrastructure to adapt to sustainable traffic is a slow process. Therefore, we must put in place a good basis for decision-making as soon as possible, so that the decisions we make from now on will be the best way towards the sustainability that everyone is talking about. It is human to repress things that feel unfamiliar and that question business as usual, but for the future of humanity, it is really bad not even wanting to know. And while you hesitate, the situation quickly gets worse and therefore harder to handle.

Conclusions
It is obvious that the more people we can make preferring walking and cycling, the greater the margin will be for those who can’t travel as sustainably. Public health, noise, air environment and congestion are also important aspects where walking and cycling are superior, but here I have only focused on climate impact.

Of course, it is important to quickly move travelling from the most climate-damaging modes of transport to something that behaves a little better, even if it is still not really sustainable. Anyhow it is a way to gain some time, to “duct tape” the worst shortcomings so that you have time to tackle the problem properly before it has run past us completely. Such emergency measures are sometimes called damage control.

But investments in modes of transportation that are half good should never be allowed to be made by making it more difficult for the most sustainable – walking and cycling. Do not push them away in detours, do not squeeze them in too narrow passages, do not make their paths crooked and less attractive. The more obstacles and detours they get, and the longer everyday distance society expects us to travel, the more people will of course choose other and less sustainable modes of transportation. Although not everyone can ride a bike, we really need making it easier for all of us who can.

In order to achieve sustainable traffic, we must have good knowledge of the climate performance of all different modes of transportation and use that knowledge in all our decisions. While using our duct tape we also have to plan for our measures beyond that. The most important thing is to persistently steer the development of our communities so that they can offer short everyday distances. Then the most sustainable traffic becomes the alternative you are tempted to choose in the first place. Nature has an uncompromising life cycle perspective. That is why our decision-makers must have it too. Make sure that the necessary knowledge is produced so that the goals are possible to achieve!

The article is entitled Cycling is sometimes more important than electric cars for reaching net-zero cities. He emphasizes that electric cars are not truly zero-carbon, and that carbon-intensive infrastructure such as roads … and the way it embeds car-dependent lifestyles also contribute to the transport sector’s major climate impact.

Around 4,000 people in London, Antwerp, Barcelona, ​​Vienna, Örebro, Rome and Zurich had to carefully log all their travelling for two years. Based on that, their carbon footprint was calculated. He himself was surprised that those who cycled everyday caused as much as 84 % ​​lower carbon dioxide emissions than those who used other means of transport!

If you count manufacturing and use, he writes that the CO2 impact of an electric car is around 10 times the impact of a bicycle per passenger-km, and a fossil car is around 30 times. It is close to the approximate figures I have arrived at – electric car 8 times and petrol car 25 times or more. The picture is becoming clearer and the role of the bicycle is becoming increasingly important! I recommend reading his article!

-The fact that traffic causes a great deal of our climate impact is obvious, i.e. from

Anders Arwefeldt, LTH 2014: The electrically powered assisted bicycle’s potential in improving the climate performance of the transport sector. On page 28, the climate impact for the manufacturing and use of several vehicle types is compiled.
http://lup.lub.lu.se/luur/download?func=downloadFile&recordOId=5050511&fileOId=5050512
(LTH is the University of Lund, Sweden, faculty of engineering)

-Bicycle: Trafikistan has compiled various LCA sources about the bicycle’s greenhouse effect. Here is also explained why food production for the cyclist should not burden the bicycle’s climate impact. The diagram above is also commented on here (except for the electric car’s bar).

-Electric bus: Göteborg’s modern electric bus called ElectriCity using the Göteborg local electricity mix emits 13.5 g CO2/personkm while the bike emits around 5 in a life cycle perspective. The bike is thus almost 3 times as good for the climate. So we can’t stop thinking just because we are introducing electric power.

-Battery production has improved since 2017 according to a renewed study from IVL 2019. The reduction is between 50 and 66 %, but if data that is less transparent is included in the calculations, the reduction can be as low as 25 %.

-Increasing battery size: Demand for heavy electric cars with larger batteries is increasing. Quote, translated from Swedish: ”Many new electric car models in the crossover and SUV segment that are now released have a significantly larger battery [than the average for electric cars] and the double size is no exception.”

The development of battery production indicates a reduction in climate impact, but the use of larger batteries on an increase. It is also unclear whether a battery will last for the entire life of the car. Therefore, the assumption in the chart in accordance with IVL’s statement from December 2018 is reasonable until we get new reliable figures that give a different picture.