Should the food needed by pedestrians and cyclists be counted as fuel? I have seen a summary LCA discussion that quadruples the cyclist’s greenhouse effect by including the food needed for the pedal work. Here I explain why this is completely wrong in my opinion.

LCA for bicycles
In Life Cycle Assessment (LCA) for comparing different modes of travel, the total environmental impact is calculated per person and km. This includes direct and indirect impact from manufacturing, use and disposal of the vehicle and of everything it needs to move. In many cases, only the greenhouse effect is considered, although the travel modes affect the environment in a number of other ways as well.

Here is a diagram in Anders Arwefeldt’s master thesis at the Swedish University of Technology in Lund 2014, which shows impacts from production and propulsion for different types of vehicles. 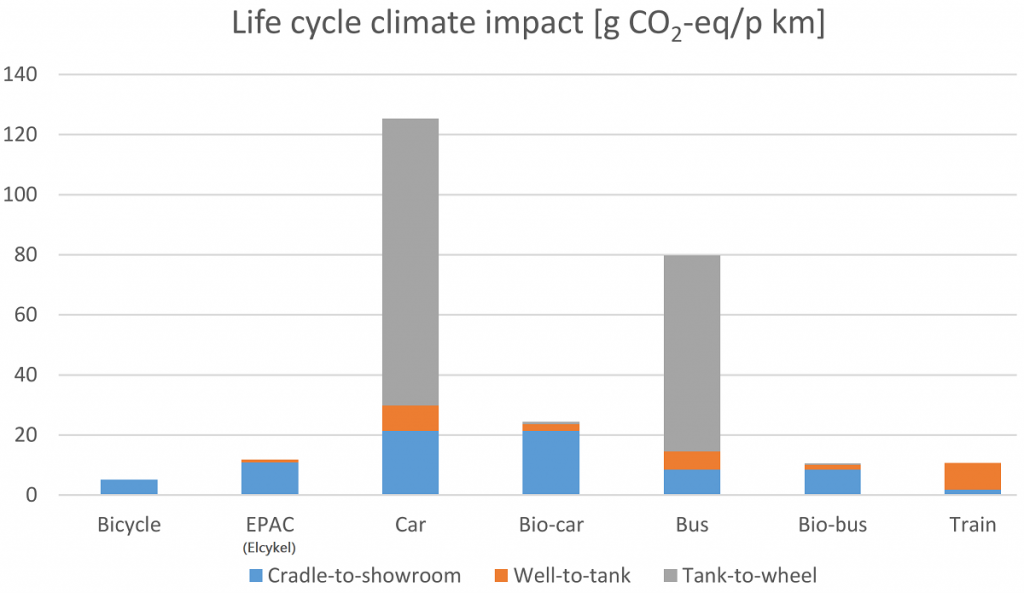 In this diagram the entire impact of the bicycle comes from manufacturing (blue). The electric bike has more than twice the impact from manufacturing, mainly due to the battery. It also adds production of some electricity for propulsion (orange). Food production for the driver is not included in either. Thus, food is not seen as ”bicycle fuel”.

The bio version of the car and bus has minimal impact from tank-to-wheel (gray). That’s because the carbon dioxide in their exhaust gases is not fossil but was considered to be balanced by binding in plants. And the very low impact from production of the train is because it delivers so many passenger kilometers during its lifetime.

But let’s not get lost in all the details. It is sufficient to note that the bike moves a person in the far most climate-smart way of all vehicles in the diagram. At a shared second place we find the bio bus and the train with 2.2 times the impact. The electric bike reaches the fourth place with 2.4 times the impact of the bicycle. But we now know that biofuels consume forest at a higher rate than it grows, even in Sweden. Therefore, it is reasonable to expect that the biobus has a larger impact on the climate, say around 3 times as much as a bicycle.

Impact from the infrastructure – construction, operation and maintenance of roads, railways, etc. – is not included. It can make a big difference. Bicycle and electric bicycle would be affected quite equally, but the total impact from the train would increase most significantly according to figures from MIT 2010.

The health aspect
Anders Hansen, psychiatric specialist and author, says in part 3 of the TV series ”Din hjärna” (Your brain) in SVT 2019:

While our ancestors were moving somewhere between 15 and 18 thousand steps a day, surveys show that today we don’t move more than around 5 thousand steps.
(translated from swedish by me)

He also describes how our immobility has negative consequences for physical and mental health, for sleep, stress and for the aging of the brain.

Since we need both traveling between places and getting exercise, I think it is wrong to burden walking and cycling with the environmental and climate impact of the food spent on moving. We need to move our bodies more than we do anyway. And it costs society extra resources and environmental impact if we separate these needs – by traveling motorized and then (hopefully) using different time and other resources for exercise. By combining the needs, they automatically become a daily habit, and if the distance is not too long, we can also gain a lot of time. A test in the daily newspaper Göteborgs-Posten where participants made a round trip of about 5-6 km in Göteborg was won by the cyclist, leaving the public traveler and the car driver far behind. Anecdotal but reasonable. And this is without the other travelers reserving any time for the corresponding amount of exercise.

In Anders Hansen’s program, Mai-Lis Hellénius, professor and chief physician at the Karolinska University Hospital, says that everyday exercise is the key to a healthy life. Both adults and children are sitting about 9-10 hours a day, and we have never been sitting so much before. Although separate exercising has increased, everyday motion has gone down.

In LCA, the problem with multiple benefits is known. If you have to compare two activities where one gives only one benefit but the other gives two, you have to take that into account so that you do not compare apples with pears. One way is to supplement one activity with something so that it can also deliver both benefits. In our case, we may supplement the motorized traveler with the corresponding dose of separate physical exercise. Then it becomes obvious that he or she consumes just as much extra food, but that the motorized traveler also incurs the impact that the travel service induces.

I use the word motorized traveler for anybody moving with the help of an engine, i.e. virtually any mode of travel except for walking and bicycling.

Weiss 2015: On the electrification of road transportation – A review of the environmental, economic, and social performance of electric two-wheelers. Martin Weiss et al, European Commission, Utrecht University, University of Geneva.
Says 0.5 ± 0.1 kg per 100 personkm for bicycle in appendix, Table A2.

MIT 2010: Life Cycle Assessment of Transportation Options for Commuters. Shreya Dave, Massachusetts Institute of Technology.
Their diagram on page 11 indicates kg as the unit, which must be incorrectly written. Instead, the text on page 6 indicates g, which is in the same order of magnitude as other sources. Note that they specify values per mile, which I have converted to values per km.
(GGE = Greenhouse gas emissions. PMT = Passenger-miles traveled.)

Conclusion
The climate impact from a bicycle is much lower per person kilometer than from any other mode of transport except possibly walking.

The food that pedestrians and cyclist needs for propulsion should not be included in climate comparisons because we need the everyday exercise that the active mobility provides. The alternative is the significantly higher impact that all other vehicles cause plus the extra food we then need for separate training to compensate for the sitting still. Immobility has negative effects on physical and mental health, on sleep, stress and on aging of the brain.

For really short trips, walking is best. For long journeys, some kind of motorized travel is required, but society should strive for a development where as many people as possible can travel in the most climate-smart ways and get their daily exercise at the same time. We really need it.

I read your article
”Cycle more often 2 cool down the planet! Quantifying CO2 savings of cycling.”
at https://ecf.com/sites/ecf.com/files/ECF_CO2_WEB.pdf

But I think there is a problem with your conclusion that food needed for human propulsion should be included in the LCA. This is explained in detail in [url].

I would be happy if you read my article, and even happier if you gave me some comments on my argument.

Addition 2021-09-01: Jobs that provide excess exercise
My argument for not counting food as bicycle petrol can be questioned for people with a job that provides a lot of exercise. Muscle work that exceeds daily exercise for a healthy life might burden the climate with the corresponding amount of food.

Anders Hansen says that we are adapted from the savannah age to walk around 18,000 steps a day. If we exceed that in our daily lives, we can consider whether our cycling actually requires food as bicycle petrol for the excess part.