How fast do people bike?

Location and method of measuring
There is a broad and straight path for cyclists and pedestrians across the open place Heden in central Göteborg. Cyclists and pedestrians are separated from each other by a white line. This path is widely used for people going to or from work. I wanted to measure in a place with many road users, but where they were not disturbed by crossings or by being in each other’s way. The choice fell on a spot almost in the middle of Heden.

I marked out two lines across the path with water from a PET bottle to use as the beginning and end of a speed measuring distance of 3.95 m. I video recorded the traffic through the marked section from the side. Afterwards I could step frame by frame in the video to read out times with a resolution of 1/30 seconds.

Two cyclists about to leave the measuring area limited by the two water lines. I was standing with my video camera at the right a little bit outside this image.

The measuring
I video recorded on Wednesday the 11 of June 2013 for 15 minutes at 8:05–8:20. During that time 155 cyclists and 54 pedestrians passed in the sunny but not so warm weather. All were grown-ups in working age, probably on their way to work.

The following diagram shows the measured speed of every road user in their order of appearance:

Red dots show the speeds of cyclists and green triangles the pedestrians.

All pedestrians had about the same speed. Fifty of them had a speed that was correctly rounded to 5 or 6 km/h. Only one walked more slowly, just below 4 km/h, and she was deeply engaged in the screen of her cell phone. The three fastest were still under 7 km/h.

The speeds of the cyclists were much more spread out. Almost all of them held between 15 and 30 km/h. Thus, in this interval the fastest cyclists had twice the speed of the slowest. The average speed for all cyclists was 21.5 km/h. (This differs only by 1.5 km/h from what NTF measured among commuters on the bikeway between Malmö and Lund 2012.) 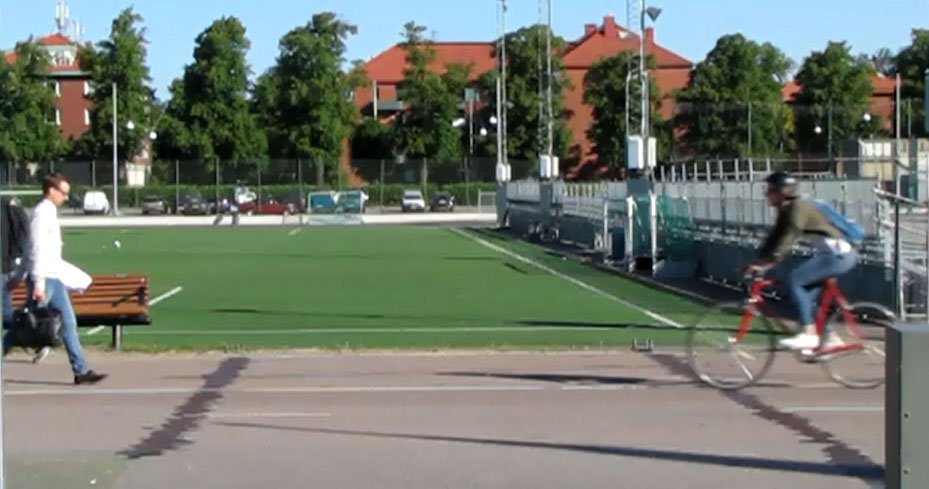 A video frame from my recording. The man at the left is the second fastest of all pedestrians, while the cyclist keeps just above average speed. Whose head will first arrive at the leftmost measurement line? Click on the image to see where the cyclist is when the pedestrian has reached that line.

Reflections
In the short section of the path that I was monitoring, the flow of the traffic was ideal all the time. All kept to their own lanes, even those who had the eyes on their cell phones. No one got in the way of any other. No one needed to use the bell. No one seemed to be concerned. The path was wide enough for two pair of side by side cyclists to meet. That actually occurred at one occasion. My recording could cause any dramaturge to fall into sleep. It is as sweet as a propaganda film in a dishonest dictatorship. But this is exactly how the bike + pedestrian traffic should work.

The reason why all road users stayed within their lanes is probably that there was enough space for all, and that there was so much traffic so one was constantly reminded that there were others to consider. I don’t think their consciousness was really engaged in this – the traffic just worked automatically, thanks to external factors.

Is 30 km/h a high speed? Among others, Johannes Westlund asks that question in a discussion thread on a Facebook page for the “Yimby” city planning community in Göteborg. He reminds us that 30 is the lowest speed on national signs, the speed on signs for places where children are present in the middle of stressful car traffic in the morning. What then makes us perceive a car in 30 km/h as slow and harmless, but a bike in 30 as fast and dangerous, although it takes the weight of fifteen bikes including drivers to reach the weight of one single car?

It probably depends a lot on the traffic situation, and on pure psychology. In a clearly marked bikeway, 30 km/h should not be a surprising speed. But maybe we do not really take cyclists seriously when we are walking. Sometimes the traffic design does not either. Replace the bike on a bikeway with a car of same speed in the same place. Just remake the separation to the normal street/sidewalk separation standard. Then I think that the perception of high speed would disappear into nothing for most observers.

But the more cars in minimum 30 km/h we can replace by bikes in maximum 30, the better for the city as well for the health. Of course you must always adjust your speed to the circumstances, but the city must also adjust the circumstances to the modes of transportation that they want to have. The traffic situation during my measurement was simply a sweet dream.

I also found the large dispersion in cyclist speed interesting. It demonstrates the need of space for overtaking to let all cyclists coexist without trouble. The limited space in a city is of course not enough for this everywhere, but space for overtaking should be provided wherever possible along the bikeways. Where the streets Avenyn and Allén intersect, there is now an interesting feature. The elevated, paving stone coated separating strip between bikes and public transports meets the level of the bike path smoothly, allowing cyclists to use this otherwise waste area for overtaking. I am not sure it was really designed for overtaking, but it works. 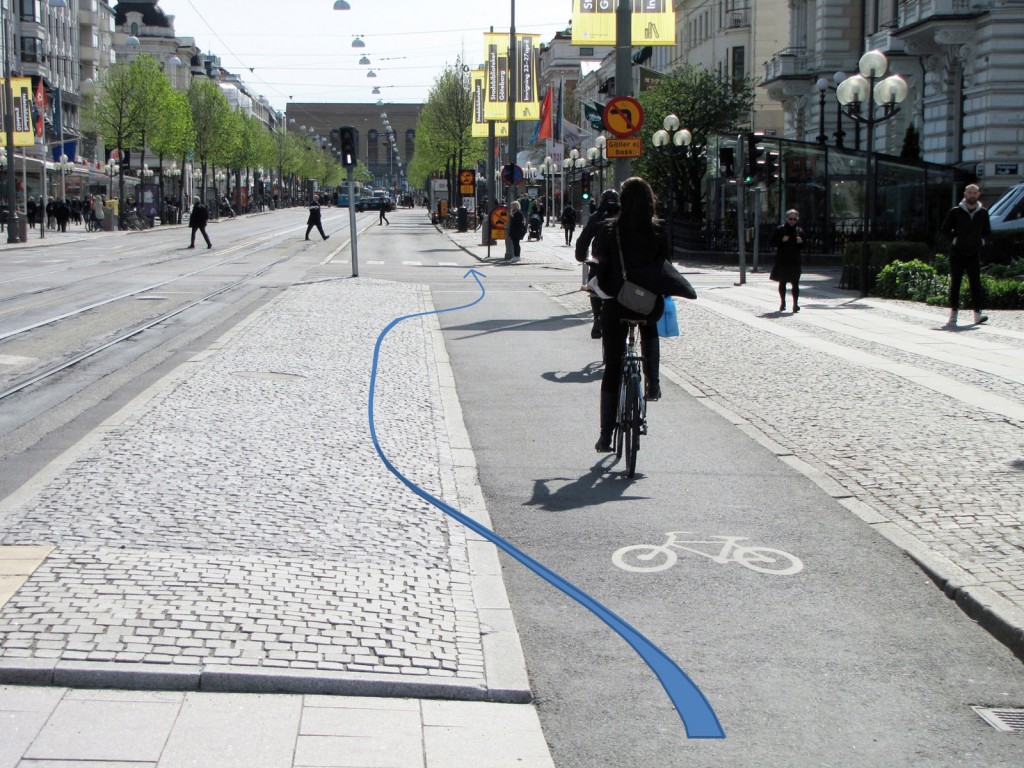 The bikeway at Avenyn where the stone coated separating strip at the left facilitates overtaking.